The amount of energy running between the columns of the Oosterschelde storm surge barrier is enormous.
Ever since the barrier exits I have been riding my rowingbike over it and impressed by the energy of the tides and the waves I have been dreaming and thinking on how to ”catch” some of this energy and use it.
Last few years I have been working on it a lot and came to a new concept with and unexpected but very fertile second aspect; a method to compensate for the loss of flow by any means of tidal energy equipment (also for turbines like Tocardo turbines)

A year later Omroep Zeeland television made another item on the experiments in the zeeland university that proved this concept of streamlining will at least deliver 8 % more current; you can see it here

You can see an animation of the concept here:

Also some pictures before and after the streamlining: 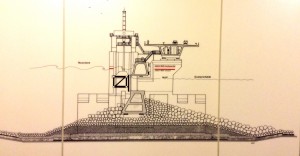 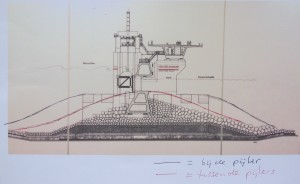 The new concept for the Oosterschelde tidal power exits of 2 parts:

1. The use of large back and forth moving wings in stead of turbines.
These large but relatively slow moving wings are more friendly for the wildlife in the sea. Turbines wingtips move at speeds up to 85 km/h;  a (potential) pain in the but for fishes and sea mammals.

2. Compensation for the loss of waterflow (due to energy harvesting) by streamlining the bottom and eventually the columns of the Oosterschelde storm surge barrier.
Crazy enough this very simple solution has not been thought of before.
All official parties dealing with the storm surge barrier have always been saying and writing that large scale tidal energy projects can not be done at the Oosterschelde storm surge barrier as it would decrease the waterflow too much. This would not be acceptable for fisheries interests, sand hunger and environmental groups. With the streamlining process the waterflow can even increase despite of the energy harvesting. With more flow the energy gained increases in the third power.

It is a real breakthrough that now plans can be developed for large scale tidal energy harvesting at the Oosterschelde storm surge barrier. It has the potential to deliver as much energy as 0,5 to 1.0 times the Borssele nuclear power plant.

Since 2015 Tocardo placed 5 Turbines in a tide way of the barrier. I am very interested to see the progress they make and I hope it will lead to more tide ways to be exploited soon. There is no longer a reason not to use all tide ways.