Building, testing, tuning and in the end flying. It is possible… 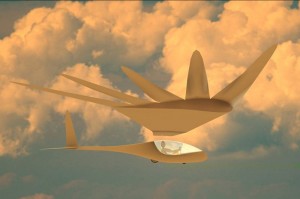 If a propeller Human Powered Aircraft can fly with 15-20% loss in propeller and 15-20% loss in drive system from pedals to propeller than this plunging wing device must be more efficient . Loss in rowing system and Dyneema®  cable on Sneks are much lower than chains and sprocketwheels. There will be practically no loss in the movement of the wing; optimal wing loads can be achieved all over the wing.
This is going to be a great glider too; we do not have that primitive airbrake called propeller!!

What’s the use of it?
It might not be a vehicle for daily use, than it is only the kick of filling this clear blank spot in aeronautical history. So the aircraft after breaking a few records would be stalled in a shed and catch a lot of dust like most of its other HPA predecessors. :-( It could be a nice object for a flight museum or art object (we have seen lesser art being sold for more than this plane is going to cost…) But the goal for me is to explore this technical possibility; from such experiments there is always a spin-off in technical solutions that can be very helpful in other fields of technique. And I would not be astonished at all if this apparatus could work so fine that a complete airworthy plunger could be developed that could be a serious and safe means of transport and off course an ultimate fitness machine.

Lets first find some funds to get started :-) I find it hard to tie my own hands down to my rowingbikes and not start actually creating this machine :-)

The only control not yet clearly solved is pitch control of the hull. The up and and down rudder could be trimmed in optimal lift/ drag speed by putting another axis on the steering bar at point 12, so that steering bar left down e.g. would be nose down, right down nose up. (only usable when left thumb button is pushed)
For emergency nose down commands pushing the whole steering bar forward so that slack in the armstrokecable is achieved could be a usable and conventional feeling nose down control.

Why do I put this design on my website in such an early stage?
Did you patent it?? will be a question asked. Who cares… Lets build a nice machine!

Do you doubt if this will work? have a look at these links and see some similar designs that proved to work, just as this roeivliegtuig will do given time… :-)

www.aquaskipper.de
www.ornithopter.ca
www.delfly.nl
Human Powered Ornithopter
Very similar to Derk’s plunging wing design is the design of a human powered ornithopter by a group of students at Ontario University. They have actually build it and the propulsion system is very similar to the rowingbike. That is why rowingbike.com sponsors this very interesting project. For more info look at
www.hpoproject.ca. The testing and further development of this aircraft will be continued summer 2010.