In agreement with Bartel I’ll report here from his long distance tour.

The chronological order is from new (top) to old (bottom)

He has an appointment with his Mom, she’ll cook asparagus for him. I’m sure his Mom feels very spoiled because her son rowed more than 3500 km from Athens to enjoy her asparagus – of course with sauce hollandaise :) Chappeau Bartel, my friend! Very Well done. Really!

He’s back in his home country after 30 days. I know he didn’t kiss the soil, but crossing the border from Germany to the Netherlands surely made him smile. He builds his tent 15 km East from Venray.

Today I met Bartel at the campground in Seck and accompained him on a hyper small part of his trip. At this moment his trip counter shows 3150 km. Bartel looks good but feels a little chilly, because we rode in constant rain at low temperatures. I left him close to Betzdrof Bartel continued his travel to Brühl, near Cologne.

Bartel rides from the hilly region called Tauus to the Westerwald, where always a cold wind blows. It’s hard to find a way without climbings in this region. Bartel stays in his tent near a small village called Seck

He’s near the German bank town, Frankfurt, in a village called Mörfelden. The past days he misses the sun, but he stays dry, besides this and that rain shower, As I know Bartel he’s looking at these showers quite positive, because he really is not a soft egg :)

Bartel follows the Neckar river and stays overnight in Eberbach

2014-May-25
Bartel’s brain, muscles, equipment took him close Stuttgart (people over there speak a strange German dialect). He sleeps, after some search, in Kleinheppach

2014-May-24
He’s in my country now, followed the Iller valley and reached Sinningen, ca. 40 km South of Ulm. Hopefully he enjoys enough Bavarian beer and a Haxn.

2014-May-22
In the land of the mountains Bartel rows (rides) from Taxenbach to the area of Oberdorf which is around 40 km from Innsbruck. He’s supposed to pass a height of over 1200 m on his way.

2014-May-21
Bartel doesn’t use the Großglocknerstrasse. He figured this way is too high and too cold. I appreciate his decision, it shows me he’s not riding in head-through-the-wall mode. He reached Taxenbach (North from the Glockner) via Mallnitz.

2014-May-20
Bartel’s European attitude is obvious: he rows via Tarvisio (Italy) to Greifenburg (Austria). Austria, home of the mountains.

2014-May-19
This morning he’s in Tolmin, Slowenia and used his alternative route from Novi Vinodolski via Rupa and Postojna. The weather again is not warm enough (12 – 15 °C), cloudy, sometimes rain. Bartel would not be Bartel if he would not ride a heavy tour today. His target is Kranjska Gora, he passes the Vrsic-Pass (1611 m – it’s Slovenia’s highest col) 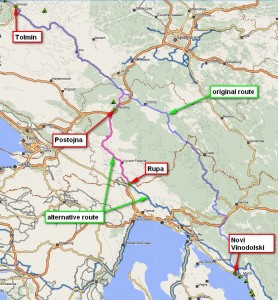 2014-May-14
He’s in Karlobag, around 120 km from Rijeka. He likes the coastal road and enjoys the low traffic and that the way doesn’t bother him with steep slopes. He expects these niceties again in Slovenia.

2014-May-11
He’s 100 km from Split. He feels well, sometimes Bartel has to overcome strenuous sections. His daily distance average is 100 km.

2014-May-05
He’s in Vlore, Albania. Yesterday he passed many ascending slopes, one so steep that he was forced to walk for 500 meters.

2014-May-03
Bartel is in Preveza, 85 km from Igoumenitsa. On May, 4th, he’ll sleep in Albania. He feels just a bit chilly, the temperatures until then reached only max 22 °C . He receives some rain, original quota from Bartel: too much to stay dry, too less to get wet.

2014-April-30
Bartel reaches Athens Airport, he gets himself, his rowing bike and his luggage ready and starts the tour he has in mind for years.