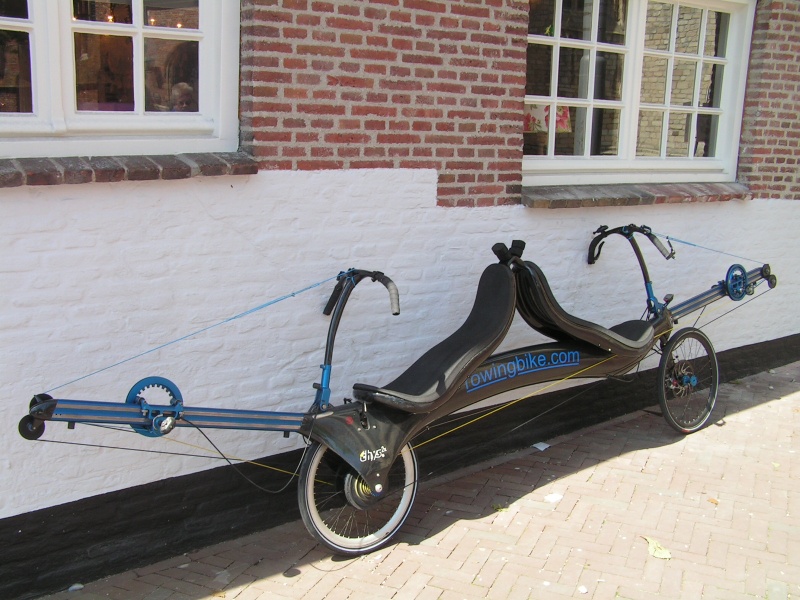 The carbon Tandem production has been postponed due to the passing of the builder of the frame, the well known designer Kees Radius.

It’s winter 2008-2009 and during winter there’s always time and opportunity for a project. Last winter 2007-2008 it was the finishing of the Carbon THYS 209 design of which now (Christmas 2008) the first production samples are pulled from the mould.

The two preceding winters I made every winter a new tandem. Really nice, designing and building a tandem from scratch. However, it’s very time consuming and the result is one prototype that is not reproducible. Everything is glued together by hand without any moulds and a large set of tricks is needed to get everything in line.
The experiences with the high steel tandem (26 inch front wheel, 28 inch rear wheel) and the aluminium tandem (two 20 inch wheels) learned me a lot about how the ideal rowingbike tandem should look.

I got quite fed up with the 3D computer design process when designing the 209. So many hours at the computer and so little progress, I really was looking forward to do it the old-fashioned way. Shaping from a block of foam and solving al problems on the way. 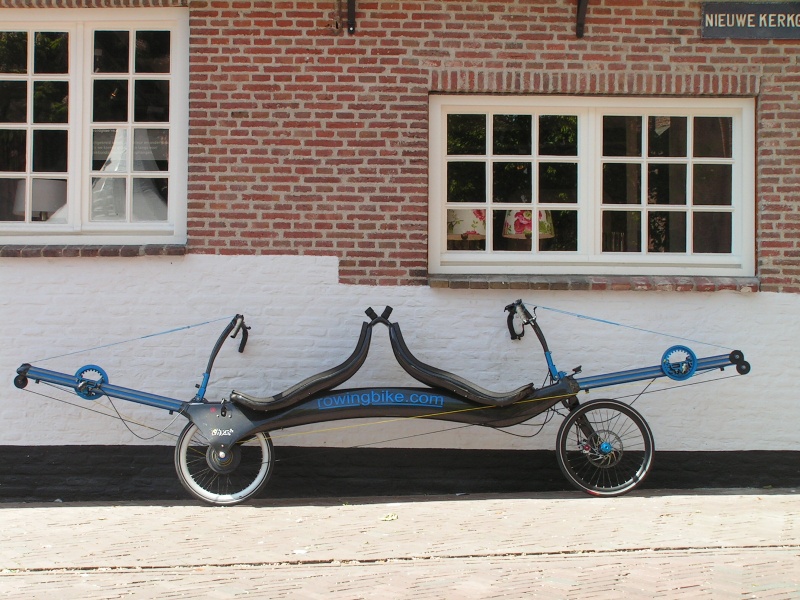 Meanwhile I’m testing the first 209 production samples and I find out quickly that the aluminium bowsprit profile is not strong enough. I find a small play halfway the sprit and suspect deforming of the aluminium. Just to be sure I ask Arno Seijbel (sprinting canon with rugby roots) to do the 20% slope at Zoutelande (near Middelburg) with the Carbon 209. He only had to do it three times to conclude that the play had increased. So, more calculations on the bow sprit had to be done, taking in account the different stresses caused by the new foot slider, which I had only on paper at that point. This new foot slider would decrease the stress on the bow sprit by 60%.

After a good night sleep I decided to stop making nice scenario’s with the existing bow sprit and ordered a re-enforced specimen. The expensive mould was ready for the scrap box and a new one was made in the next four months. During this time the old profiles were re-enforced with epoxy foam and Richard en Theo did thousands of kilometres until the bow sprits finally gave in. Theo’s broke down after his excellent Londen-Edinburgh-Londen tour (1400 km in three days and 6 hours) and Richard’s gave up during holidays in Italy. Richard has the peculiar habit to get serious material problems only far from home. 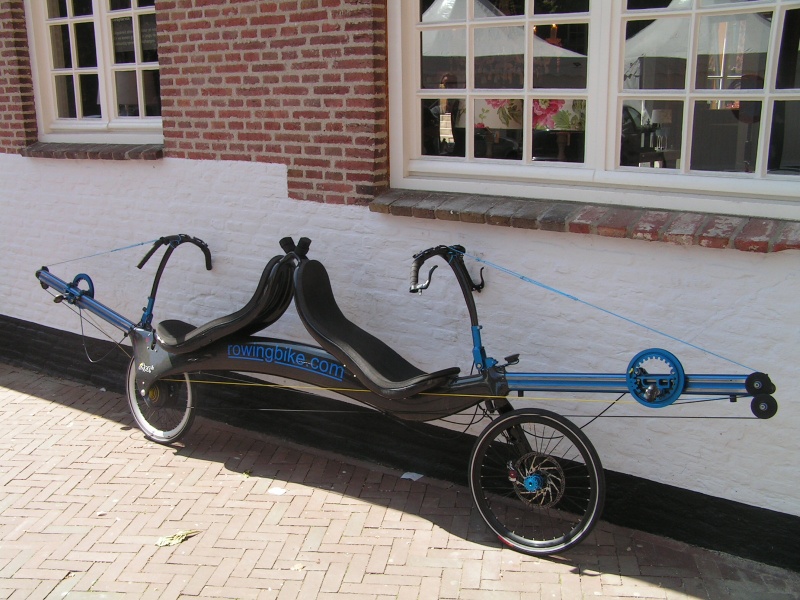 With the parts of the 209, handle bars, seats, sprits, sliders, forks, etcetera, it should be fairly easy to make a tandem. You ‘only’ need to make one more part: the frame/rear fork.
So, winter 2008/2009 I started drawing that tandem and shaped in into foam. An old-fashioned feeling, my workshop full of little foam pellets and sanding dust, just like in the old days when I did surf boards.
Anyway, after some two or three months the sanding was done and only a problem with the rear fork remained. That’s going to be basically a big carbon box in which the rear wheel is mounted. Also an opening must be provided for the V-brake. Takes a bit of hard thinking on how to model this the best way. At the rear a disk brake is not an option: on both sides of the wheel there’s already a snek for the propulsion. I decide to take this problem to my old friend Keer Radius, who will be making the moulds. Kees has an enormous experience with the production of beautiful shapes, moulds and models, by which he’s earning a living for decades now. Make sure you have a look at Radiusholland.nl.
Kees makes a suitable solutions for the rear fork, adjusts the foam models and laminates them with a layer of glass epoxy. Together we align this model of the tandem with a rear axis, head bearing and seat positions. Finally we put the bow sprit stumps correctly aligned in place. Rather important too.

Beginning of April 2010 the first carbon production tandem is coming from the mould and I take it to Middelburg to assemble it. Sunday evening April 18 is the moment of truth: the first test ride with Caroleen on the new tandem. A remarkable experience. Immediately a relaxed handling behaviour, which could not be said of it’s two predecessors. Those were quite jumpy during the first couple of rides. Sure, you do get used to that, but the lacking of any nervous road behaviour on this new machine is something I’m really glad with. The acceleration and the riding experience is great. Figures, if you realise that this tandem is about the same weight as the THYS 280, around 18 kg.

During this first test ride I persuade Caroleen to take the handle bar too. She always refused this on the steel tandem, due to its nervous character. A couple of days later we do the first trip around the Veerse Meer (lake). What a nice rowingbike, rides, handles and brakes almost effortless!

A couple of days later I decide to make a calculation of what I did pay for the carbon tandem. Proved to be quite a shock. The tandem was already on the website for a couple of years now with a preliminary price of 6900 euro, but I now realise that only the parts are already 4200 euro ex VAT… My own time in designing and shaping and the work Kees put in the moulds are not included in this price. If I spread the costs of the mould over a number of tandems (say 1500 euro per tandem) and if I add the VAT, the total price results in 6783 euro. Since I will also have 30 hours of assembling on each tandem, I decide to put a selling price of 8800 euro (incl VAT) on the website. With slight embarrassment.

Well, if you ride this tandem you will realise it too: it is a priceless rowingbike !!

You’re more than welcome to come by for a test ride!