The THYS 222 is sold out and this model is not being produced anymore (for the time being?). Parts remain available as for all earlier THYS rowingbikes.

After more than two years of CVT shifting system the THYS 222 Rowingbike is updated again. The new version is called THYS 222 Revolver due to the rotating gear ring.
The Revolver system has evolved from the CVT system and resembles a lot. The efficient way of shifting gears has remained the same: there’s one clutch button, operated with the right hand thumb.
Making a stroke while pushing the button results in a lower gear. Making a recovery stroke with the button pushed down the result is a higher gear.

Advantages of the Revolver system 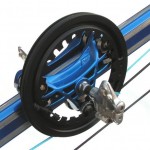 In stead of the cable clamp (the wedge housing) at the CVT version, there’s a gear ring around the foot slider. This ring is actually a drum with a left and a right side.

At the right side the shock cord (55 grammes) can be wound up and off. 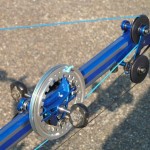 Apart from the steel CVT cable (170 grammes), also a 3 mm dyneema cable (19 grammes) can be applied as a propulsion cable. The lifespan of the dyneema cord is significant: 1100 km. If you reverse the cable in time the lifespan is doubled. Only the part that runs along the Snek wears out. 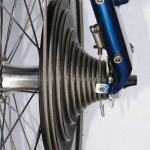 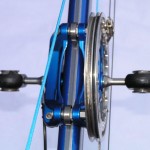 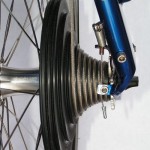 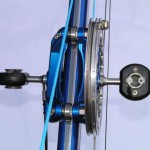 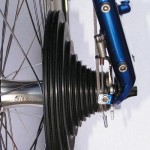 The gear ring can be locked at 24 positions per revolution. At the 178 mm Snek it needs almost 4.5 revolutions to go from the lowest to the highest gear. Therefore you have more than one hundred gears. Strickly spoken it’s no longer a CVT (Continuous Variable Transmission), but this can’t be noticed in everyday experience. Each step is so small that the familiair smooth feeling lasts!

After assembling the system needs to be tightened one or more times. In the beginning the twined Dyneema®  and the knots in it need to set, resulting in a somewhat greater length. The return elastic can compensate quite a lot of difference in length, but there is an end to this. In this case simply shorten the cord slightly. Dyneema®  tends to “crawl”. After a longer time (approximately six months) you might need to shorten the system again. You can shorten it simply by hooking the shock cord into another hole of the Snek. For larger adjustments you can shorten it at the ring or choose another hole for the shock cord.
In the gear ring are, at equal intervals, six mounting points for the return shockcord. They enable the rider to make personal adjustments for gear range.